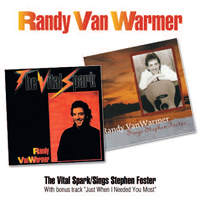 RANDY VAN WARMER recorded “The Vital Spark” in 1994 and “Sings Stephen Foster” in 2003 just before he was diagnosed with Leukaemia and he died on 12th January 2004 age 48. His widow Susan has overseen this release and added as a bonus track a beautiful never before released solo recording of “Just When I Needed You Most” which was a worldwide smash HIT (USA no 4 and UK No 8) when it was released in 1979. Mick Ronson who was working with Ian Hunter at the time also guested on “The Vital Spark”

Amongst the songs Randy wrote was the hit single for The Oak Ridge Boys “I Guess It Never Hurts To Hurt Sometime” Other artists who have recorded his songs include Charley Pride, Dolly Parton, Conway Twitty, Kenny Rodgers Michael Johnson and Alabama. In his later years he continued to write music for others. His final album “Sings Stephen Foster” was released posthumously only in Japan. Ironically Randy Died 140 years to the day since Stephen Foster died.

Randy Van Warmer is best known for his 1979 smash hit 'Just When I Needed You Most' (there is a lovely acoustic version of the song on this CD). He sadly passed away in 2004 but not before he managed to complete 'Sings Stephen Foster'. Stephen Foster was a US songwriter from the 19th century and often quoted as the 'father of American music'. On this album Randy Van Warmer covered some of Foster's well known numbers including 'The Camptown Races' (done here in a very laid back style), 'Oh! Susanna' and 'Angelina Baker' (again a wonderful west coast AOR feel to the music). All in all a very enjoyable listen and one that until now has had a very limited release. The other album on here is 'The Vital Spark' recorded and released back in 1992. Randy Van Camper has a very smooth, melodic voice and suits the music which recalls the 70's soft rock sound and the 80's AOR of bands like Chicago. Mick Ronson (David Bowie/Mott The Hoople) also plays on the album, along with Shayne Fontayne of Lone Justice fame. Personal highlights include the gentle pop of the title track and ''I Will Whisper Your Name'. The music on here is a nice mix of AOR, country, pop and a little blues. Mind you at times you'd be hard pressed to know the album featured two prominent guitarists! One for soft rock/AOR fans and the Stephen Foster disc is an interesting curio in the way that the songs have been arranged. 3/5 Jason Ritchie, www.getreadytorock.com (June 2011) (The Vital Spark)...a record built around Van Warmer's sweet vocals and features any number of songs that could have been country hits... (Sings Stephen Foster) A beautiful and deeply moving album... Nick Dalton, Maverick (July 2011) ...an excellent snapshot of Randy van Warmer's music and is tremendous value for money as well Fireworks (Sept/Oct 2011) These two albums are the real rarities in his catalogue...The Vital Spark was recorded in 1992...It's superior 80s pop rock, polished and catchy - perfect radio fare. Randy bravely tackles some of the most parodies Foster songs. This was clearly a labour of love... R2 Magazine (October 2011)