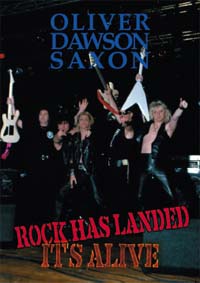 Saxon – bastions of heavy rock and part-founders of the New Wave of British Heavy Metal. When founder members, guitarist Graham Oliver and bassist Steve Dawson, split from the band they formed Oliver Dawson Saxon, a full touring and recording band in their own right – already with a live album under their belt and a studio album on the way.

This DVD shows Oliver/Dawson Saxon in full flight in a Bradford club called Pennington’s, recorded in December 2001. The mixture of old and new songs should please their legion of fans throughout the world.

I must admit that I am a Saxon fan for whom it's not really Saxon without Biff Byford on vocals. but John Ward comes pretty bloody close...there is plenty to please Saxon fans of all tastes.

...some generous bonus features, including documentary footage and interview material, while American fans will be especially pleased to discover that all three are “region-free,” meaning they will play on any regular DVD player.