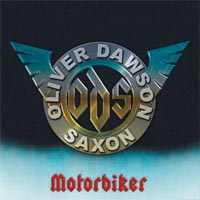 During the summer of 2000 the line up of OLIVER DAWSON SAXON took to the world stage and delivered great music that had been enjoyed for 20 years previously and their new music. Over the past decade they have released live albums and DVDs

...this is an album for those with an ear for old school classic metal, happy to bask in the nostalgia of the glory days of the NWOBHM...a decent enough effort from ODS that will certainly be of interest to fans of the original band.

...these guys make no attempt to try and recreate the Saxon sound, hell they generally sound much more relevant and contemporary than Saxon have in years! This is in part thanks to the vocal talents of John 'Wardi' Ward, who has a great contemporary voice and vocal style, much more throaty than Biff Byford's ever was...This Album deserves to be heard! Well worth checking out! Rating 10/10

This is a GREAT album; a Really Great Album. It's exciting, it's attention-grabbing, and it packs a solid punch and a hard-edged contemporary sound. From the almost call-to-prayer opening of the Eastern-tinged 'Chemical Romance' to the dying notes of 'Nursery Crimes', 'Motorbiker' is 52 minutes of thoroughbred British metal. No fillers, no fakers: 'Motorbiker' serves up twelve slabs of deliciously-inviting no-nonsense neck-breakers and doesn't look back from the off: check out the smack-in-the-face of 'Whippin' Boy', the title track's terrific harmony guitar break or the driving industrial jackboots of 'No Way Out'...

'Motorbiker' is as exciting and stylish as it comes. The interplay between Oliver and Conway is top-notch, the rhythm section is as tight as they come and Wardi delivers the good with as much passion and vitriol as the moment dictates...my advice to the band would be to drop the 'Oliver Dawson Saxon' and have enough faith to go out as O.D.S. (chuck in some umlauts as necessary) as on the strength of 'Motorbiker' there’s no need for Graham Oliver and Steve Dawson to fall back on past glories. The future lies firmly straight ahead: go get it, boys…

...their latest Angel Air offering represents a muscular throwback to the golden days of the New Wave of British Heavy Metal in the early eighties. Motorbiker is unlikely to win over too many new converts to their cause but it's a solid piece of work nonetheless...

..."Whipping Boy" and "Motorbiker" the song distil heavy metal to its purest anthemic zip, whereas a soaring instrumental piece "Screaming Eagles" sends the listener back to "The Eagle Has Landed". Right: power and the glory are still at play here.

...there's some seriously good metal getting revved up on 'Motorbiker'. Graham still has that six string midas touch and with simple riffing structures and memorable melodies during the outstanding solos tracks like 'World's Gone Crazy', 'Ghost' and 'Nevada Beach' show that guitar parts don't have to be Dragonforced to within an inch of their lives to be impressive and effective.

On the most part I was hugely impressed by 'Motorbiker', it's far better than I was expecting given the way Oliver/Dawson Saxon have been portrayed over the years. Hopefully this release can go some way towards turning the tide and proving to people that these rock 'n' roll gypsies still have plenty left to give. I mean, they've already given you a lifetime's worth of great tunes so you'll never know what else you're missing if you let 'Motorbiker' pass you by. Remember....Ignorance is no excuse.

...the album's finest moment comes with the electrifying 'Whippin' Boy', which heavy metal thunders along on double bass drum blasts and a riff that leaves you in no doubt that you are listening to a guitarist who wrote some of the most recognisable riffs in the NWOBHM...ODS have the songs to prove they are the real deal and hopefully this is the start of these devils riding out on a more permanent basis!

A surprise does lie in wait for those that take the plunge with 'Motorbiker'. Rather than mere Saxon cast-offs, there is some seriously good 1980's inspired heavy metal on show. As to be expected, solos are never far away, there are squealing guitar leads aplenty...