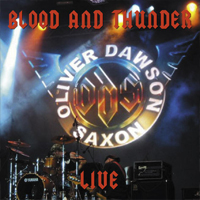 OLIVER DAWSON SAXON took to the world stage in 2000 and have delivered since great music from the very guys who were the masters and originators of British NWOBHM.

Recorded on tour in Germany in 2013 “Blood & Thunder” showcases a band that over the past 14 years has been touring relentlessly, playing to audience’s small and large, clubs and festivals alike delivering hard rock music to their fans all over the world.

Crank up very loud and enjoy.

This deliberately raw set, laid down in 2013, starts with the brilliant bullet of 'Past The Point' from the group's first studio release, as SON OF A BITCH, yet sadly includes only one piece, the grindingly infectious 'Whippin' Boy,' from its successor, "Motorbiker". Vocalist Brian Shaughnessy holds his own there, like he does on the epic 'Crusader.' The singer appreciates the irony of 'Denim And Leather' whose first line asks, 'Where were you in '79?' as he was born later, while 'And The Band Played On' shows the ensemble can still rope in power, if not glory. Ain't that what metal was about in the first place? ****

...played with a virtuosity and a genuine desire to pay tribute to the musical heritage of SAXON...A smashing and friendly output.

Excellent sound quality here that rivals the band's studio recordings. Killer rockers include "Schwemetal Fur Immer," "Whippin' Boy," "Princess of the Night," and "And The Band Played On."

'Blood And Thunder Live' is a prime example of what Oliver Dawson Saxon are all about so if you're looking for a sizable chunk of classic heavy metal to crank up and kick back to while you sink a few beers and get reminiscing of old days this will suit you down to the ground.

Oliver and Dawson both have their names on the songwriting credits for the likes of 'Crusader', 'Dallas 1PM' and 'Denim and Leather' and the versions here overflow with raw energy and power, just three of the numerous NWOBHM classics featured here. Shaughnessy acquits himself well and whilst ODS will never enjoy the level of success currently being enjoyed by Biff & Co they are most definitely more than just a tribute band.