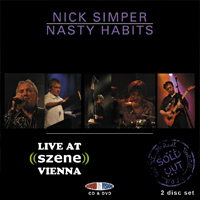 On 8th March 2011 playing to a sold out audience at Vienna’s legendary Rock Club “Szene” NICK SIMPER (founder member DEEP PURPLE) performed with NASTY HABITS (Austria’s finest Classic Rock band) original tracks from Nick’s period in Deep Purple (Mk 1). With Deep Purple today only having just one original member from their MK 1 days it is highly unlikely that the band will perform these now neglected classic songs in concert.

The mantle is therefore passed to Nick and Nasty Habits to bring some long forgotten classics back to life and bring them back to life they do. They performed eleven tracks from the first three Deep Purple albums plus one new track “Slinky” from the forthcoming new album.

This release is both a CD version and an actual DVD of the concert at The Scene, Vienna

...just enjoy the obvious passion these guys have for the songs: little things like the snippet of 'Help' (covered on Purple's first album) during Puschacher's keyboard solo, and the booklet notes by Brkusic, whose seemingly innocuous idea to try and see all the remaining members of Deep Purple proved to be the catalyst for the whole shebang. Driven by a bunch of talented musicians who are fans first and foremost, this is a true tribute album.

With the Englishman's fave "Roadhouse Blues" thrown in for some good boogie rumble, the experience, which can expanded with the bonus DVD of the whole concert, is a treat for old fans and uninitiated alike. Good to have old Nick back. ****

Although some listeners might have reservations about aspects of Christian Schmid's vocals, the DVD film of the concert confirms how well Simper meshed with cohorts perhaps marginally younger than him! His seasoned experience (he has continued to play over the years) is a counterpoint to the band's brash energy and enthusiasm.

You realise very quickly that the label DEEP PURPLE is not quite applicable, because the band played with a proper sound, they didn't play the songs like a "cover band". Simper's playing is too authentic and the rest too innovative.

Nick Simper is still great on bass and he is the one who most likely practices the 60's style, you can hear it in his melodic playing. He's not a simple "rhythm player" - a good example in this context is "The Painter"!

...just enjoy the obvious passion these guys have for the songs: little things like the snippet of 'Help' (covered on Purple's first album) during Puschacher's keyboard solo, and the booklet notes by Brkusic, whose seemingly innocuous idea to try and see all the remaining members of Deep Purple proved to be the catalyst for the whole shebang. Driven by a bunch of talented musicians who are fans first and foremost, this is a true tribute album.

The spirit of original Deep Purple is kept to some degree - particularly thanks to the 60s styled keyboard playing and a bit of jam incorporated into the songs. The general approach here is is less psychedelic than it was in the late 60s, but it is fresher and rockier, as the guitar player introduces some rawer, modern rock chops into Ritchie Blackmore's role. Just listen to the fervent, robust instrumental "Wring That Neck" or "Emmaretta" (which features cool bass and drums showcases) to get a decent notion of the aforementioned.

It is fair to say that Deep Purple MK 1 is not the line-up that is most cherished by the bands legion of global admirers. The three 1960's albums recorded by the quintet of Ritchie Blackmore, Jon Lord, Ian Paice, Rod Evans and Nick Simper (Shades Of, Deep Purple and The Book Of Taliesyn) have long been neglected by subsequent incarnations and can really be considered a footnote when compared with what was to follow.

After a long break from his Purple past, Austrian band Nasty Habits persuaded original Purple bassist Simper to join them in celebrating the bands forgotten era and this show from Vienna is offered as a combined CD/DVD package by Angel Air.

Very much a trip down memory lane the show revisits those early releases with the Nasty Habits band injecting some of their own touches, the energetic vocals of Christian Schmid and the guitar licks of Christian Heissenberger very much at the forefront. Simper, for his part, looks as if he is having tremendous fun as the band move through the likes of "Mandrake Root", "Wring That Neck" and the celebratory romp of "Hush".