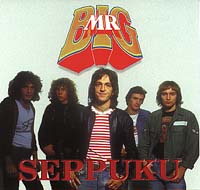 Produced by Mott The Hoople’s Ian Hunter, this is the Mr Big album that got away. Mr Big received much attention in 1976 when they had a chart hit with ‘Romeo’. Signed to EMI, the label passed on their third album ‘Seppuku’ and ever since it has become the Holy Grail for fans of both the band and Ian Hunter.  EMI released two songs from the Seppuku sessions as a single, one of which was the track ‘Senora’ co-written with Ian Hunter.

After an appearance on Top Of The Pops to promote the release, and a brief tour, the band split. Vocalist and songwriter Dicken recalls: ‘The lack of support from almost everyone who’d been involved with us…Also there were a lot of personal problems within the band, conflicts regarding the musical direction and so on. Then there was the punk thing and the new wave thing happening all over the UK, and we didn’t fit in either…We soon realised how fickle the music business could be.’

Now available at last with a 20 page full colour CD booklet with rare photos and informative sleeve notes by the band’s website manager. This album will please rock fans who wondered whatever happened to Mr Big and the vocalist/songwriter Dicken who was described by Ian Hunter as ‘England’s Bruce Springsteen…The music is bulging out of him.’

I find it unbelievable that EMI chose not to release this album first time round (in 1978). It is to Angel Air's credit they have tracked down the master tapes and finally released this album. It is not just a good album, it is a great album that will appeal to anyone who likes guitar-based rock. Essential.

It is good to hear this 'surprisingly' rocky album, they were a rather talented outfit, that probably suffered through the arrival of new wave/punk rock. The album kicks off with my favourite 'Senora', which is a great tune. It has Ian Hunter written all over it, and if Mott The Hoople had recorded it, would have gone top 40!

...Mr Big were very much a hard rock band but with a very melodic edge and a penchant for luscious vocal harmonies accentuated by the wonderful voice of main vocalist/guitarist/chief songwriter Dicken...Each track is melodic rock at it's very best...One of the great lost albums and lost bands of the '70s...

...Consigned to the Abbey Road vaults in 1978, 'Seppuku' was intended to be English five-piece Mr.Big's third album. That a major label would simply bury a record as good as this is unfathomable...Even more puzzingly, 'Seppuku' was overseen by no less a star than Ian Hunter...Hunter's praise for Mr Big head honcho Dicken seemingly knew no bounds...such lavish praise wasn't wholy without substance...Two decades later, the members of Mr Big must still be pondering the cruel insanity of the music business.

...there are some excellent numbers, from the glammy vocoder-assisted "Woman" to the Queen-esque "Here It Comes Again", replete with full-on harmonies, building piano and synths and a tough backbeat..."You Won't See Me" is a superb slab of hard AOR, and the title track brings to mind Saxon at their majestic best, culminating in an epic finale. Well worth collaring.

1978 was clearly not a good year to be a rock band. Musically, it's kind of Queen-Meets-Mott...pleasant enough

...fall sonically somewhere between the lofty pretense of Queen, the orchestral swoosh of Yes and the blustery bombast of Styx...The songs range from heart-rending,Bic-igniting areana-styled power ballads to intricately arranged rockers...

...this Ian Hunter produced album captured the band making delightful, richly harmonised music that really should have seen them go on to bigger and better things. However, all good things come to those who wait and this selection of finely-constructed soft rock is a timely release and no mistake

Dicken has a good voice and the songs are strong enough, and it is a shame that although he is still working and recording today he is only really known for one song 24 years ago. Another good booklet from Angel Air.

...Mr Big's third album reveals the band to be firmly pursuing, indeed, a Springsteen-esque line in high definition rock...though Seppuku may not exactly qualify as a lost classic, it can certainly be called a misplaced goodie.

...it's perhaps no surprise that there was no 1978 release for this album;it would have been far too hard to categorise. In some ways it has an AOR feel, and so was rather ahead of its time...Seppuku might at last find an audience...

…it's a very, very good album indeed and EMI should be bloody well ashamed that they didn't put it out first time around…thanks to Angel Air justice is finally done.

Before there was ERIC MARTIN’s MR. BIG in the USA, there was a UK band called MR. BIG in the 1970s. They scored a massive hitsingle with “Romeo”, and released 2 albums on EMI records before being droppped by the label. However, the band recorded a third album titled ‘Seppuku’, which was produced by IAN HUNTER. The album never saw the light of day until now, because ANGEL AIR RECORDS has released the 3rd album of MR. BIG on CD.

The music is very 70s, so Pop and Rocksongs melt together. The ballads are very soft (of a SMOKIE and ROD STEWART kind), but if we have a look at the rockers on this album we can hear some great catchy melodic rockers that sound like a mix between REO SPEEDWAGON, STYX and BACHMAN TURNER OVERDRIVE.

These are the songs: “Place your bets” (hello 70s REO SPEEDWAGON!), “Here it comes again” (a more AORish ballad), “Goosestep” (quirky poprocker a la CITY BOY), “Tonight” (typical early 80s poprocker), “Behind enemy lines” (good rough 70s rocker), “Seppuku” (epic piece, very STYX orientated semi-rocker) and “You won’t see me” (uptempo hard Glamrocker with an AOR/Pomp chorus). The band featured a great lead singer (with an AOR type of voice) and the songs were mostly of a high quality. Fans of the band must buy this ‘new’ record a.s.a.p! (7.5/10)