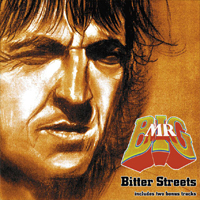 MR BIG fronted by DICKEN shot to fame in the UK with their hit single “Romeo” which made number 4 in the 1977 single charts selling over 250,000 copies. The band toured USA (with Tom Petty, Kansas and others).

The world was at their fingertips. However the follow up single did not sell and the band were dropped by their label. A follow up album “Seppuku” was produced by Ian Hunter in 1978 and was never released until Angel Air released it in 2001 (SJPCD074).

Mr Big was then rested and the band regrouped as BROKEN HOME and they released two albums “Broken Home” and “Life” both of which were re-released in Angel Air in 2004.

In 2010 Mr Big reformed and recorded a new album “Bitter Streets” with a new version of “Romeo”, plus two bonus tracks all of which showcase Dicken’s talent as a songwriter and performer.

Not until the title track 'Bitter Streets' are we finally dealing with some guitar sounds embedded in a sublime song...'God Save Me From The Blues' is one of the best tracks, featuring more energetic riffs, solos, staccato drums, and vocals...Two bonus tracks are included, the beautiful 'Close My Eyes' with a Dire Straits influence - great guitar playing too. The album's concluded by 'Dreamed', with excellent keyboard work....This comeback release will please the fans, and those who enjoy well-composed pop melodies.

This is pure melodic pop rock loaded with delicious melodies and strong lead vocals. The songs are lushly orchestrated and many fall into the mid-tempo ballad category. Addictive choruses and tasty but not very complex musicianship abound so if you are into melodic pop and rock music Bitter Streets will provide much enjoyment. Songs like the album opening "Come And Dance" and the pretty piano laced "Georgia" will certainly appeal to the pop rock crowd. The country tinged "My Sweet Medicine" is another tasty melodic pop rock morsel. The soaring vocal melodies are a high point throughout the album. Occasionally, the band rock out a bit as in the bluesy boogie of "God Save Me From The Blues". Also included is a reworked version of "Romeo", as catchy as anything on the disc.

Best known for 1977's top-five hit 'Romeo', Mr Big were probably denied continued chart success by the junk that was punk. The band loosely re-formed in 2010 to record the new album 'Bitter Streets' and this is technically a reissue of that album, with a couple of bonus tracks and a further updated version of 'Romeo'. An album of pure Radio 2 pop-rock...if only they'd stop trying so hard to be trendy at that radio station and give it some airplay, it would probably break through. It's that good.

The '70s may ooze out of many a pore, yet when tunes are as arresting as "Baby Come Around" or as life-affirming as the sunny "Sandy" with its almost baroque backdrop, the drift is timeless. So Dicken may cast another dreamlike glance over his shoulder on the exquisitely textured bonus "Close My Eyes" and sail away on acoustic lull: the streets he still walks on are full of sweet light rather than bitter tears. ****1/3

The guys in Mr Big are back. But upon hearing the fresh pop sounds on Bitter Streets you'd never know they disbanded in the first place. This band originally made a big splash way back in 1977 with their hit single "Romeo." Like so many bands, however, follow up recordings failed to reach the success of that single and they eventually threw in the towel. The band members did eventually form a new band called Broken Home, but that only lasted for a while...before they decided to re-fuel Mr Big.

Recorded in 2010, Bitter Streets finds the band returning to something quite similar to their original sound (there's even a re-recording of "Romeo" here). Streets sounds very much like a non-stop string of potential hits. And this release also includes two bonus tracks ("Close My Eyes" and "Dreamed"). Hopefully this album will reignite the flame that began so many years ago. These guys still have a fresh inviting sound--you'd never know they've been around for as long as they have. A good solid release.