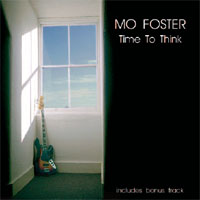 Now his third album recorded in 1999 is given its first major release having previously only been available from his own small label.

‘Time To Think’ is essentially an acoustic album in an ambient space (St Michaels Church, Summertown, Oxford) The music was interpreted by the talented musicians Mo had assembled who improvised melodically, kept perfect time and whilst doing all that, swing like the clappers!

Partly inspired by a visit to the Southern Hemisphere, "Time To Think" isn't hot and humid, but immensely warm as any great memories should be. And this music couldn't be recorded any other way than live - over two consecutive days in July 1999, at St. Michael's church in Oxford - and in the company of good friends with a collective CV reading like a rock encyclopedia, Mo himself the most renowned of the bunch. *****

...it is one for fans of jazz rock. Lovely clear sound throughout...nice easy listening.

...the album has certainly stood the test of time...superb instrumental music, jazz influenced for sure but without ostentatious soloing or lengthy jamming. Mood music in the best sense of the expression, evocative and atmospheric...