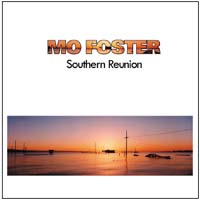 It wasn’t until 1988 that any of these personal compositions entered the public domain with the acclaimed album, Bel Assis, (SJPCD151) Mo Foster’s debut solo recording. Two years later Southern Reunion continues what Bel Assis started as the second collection of observations and ideas by one of Britain’s finest bassists.

But typically for Mo Foster this is no album of bass machismo, “I didn’t want just another bass album. I wanted it to be more compositional to give space for the other soloists to work in – to create a backdrop for their own ideas”.

The backdrops which Mo Foster created clearly provided all the inspiration needed for the phenomenal gathering of soloists on Southern Reunion. Gary Moore’s blistering guitar on the Evans tribute, ‘Gil’, was recorded in just one pass, as was Ray Warleigh’s soaring flute on the Celtic ‘Achill Island’. ‘Gil’ also demonstrates the brilliance of Gary Husband’s drumming, while ‘Blue’ provides the perfect colour wash for Frank Ricotti’s vibraphone.

This is a well-structured album with many different styles, but all of them fairly relaxed and rooted in the jazz which Mo is renowned for. Feedback (November 2004) ...this is a collection of some of the jazz rock greats...and it's to Foster's credit that he allows them free rein, which only enhances the album Classic Rock Society (November 2004) ...It's lovely really...clever and thoughtful...as you would expect from Mo (who's in fine form)... New Gandy Dancer (Issue 73) This is definitely one for the late nite, with the lights down low and a glass in hand. It's a natural successor to the previous Angel Air reissue 'Bel Assis', and possibly a tad jazzier, and first appeared in 1991...some two decades on the music has lost none of its power of seduction David Randall, Get Ready to ROCK! (November 2004)