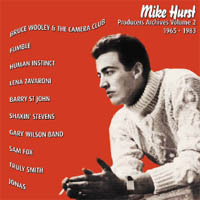 CLICK HERE TO PURCHASE ALL 4 VOLUMES FOR A SPECIAL PRICE!

MIKE HURST former SPRINGFIELD member who in the mid 60’s turned his skills to record producing and to his credit whilst amassing sales of 40 million plus records he produced he also “discovered” CAT STEVENS, SHOWADDYWADDY and SHAKIN’ STEVENS to name just a few!

“Producers Archives Volume 2” draws tracks from the period 1965 to 1983 and includes the much sought after tracks from HUMAN INSTINCT as well as JIMMY PAGE’s first guitar solo on Mike’s own track “Anytime That You Want Me” from 1965. Another track of interest to rock guitar hero fans is “Splish Splash” by JONAS (now Channel 5 Newsreader JONAS HURST) which has ALVIN LEE playing lead guitar.

16 rare tracks from this legendary record producer including the original “Video Killed The Radio Star” by BRUCE WOOLLEY. Mike is currently researching his audio archives for a “Volume 3” for 2005.

Musically the set is all over the map, jumping genres and decades in a single bound, but the song-by-song sleevenotes, penned by Hurst himself, helps bring some coherency to what might otherwise prove a terminally eclectic set.

For fans of guitar heroes, there's Hurst's own "Anytime That You Want Me," a 1965 waxing which proudly boasts Jimmy Page's first ever recorded guitar solo, while Jonas (Hurst's own, particularly precocious son) takes on "Splish Splash" and "Little Queenie," to the accompaniment of a fiery Alvin Lee.

Every song has a great story behind it, as well as Hurst's distinctive imprimatur. Fashions changed, stars came and went, but the producer was always up for something fresh and new, shifting with the times, and lavishing attention on even the least deserving.

Still, it’s the ‘60s section that makes it even more worthwhile, with Mike Hurst’s own 1965 recordings of the 12-string acoustic jangle beat of “Show me around” and the one that Mike says he hates called “Anytime that you want me”, though it’s actually a more than a decent beat pop tune, most notable because it features Jimmy Page’s first recorded solo.

Let’s hope that Mr.Hurst will “get rid of the dust on the shelves, to be able to find enough for the 3rd volume”, as he promised himself, and until then, dig out some other, more accessible works of his, like the post-Stevie SDG, Manfred Mann, early Cat Stevens, P.P.Arnold ... or more recently Belle and Sebastian.