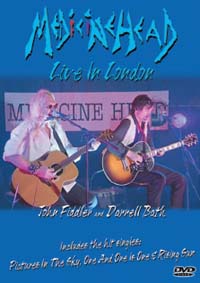 During the summer of 2003 JOHN FIDDLER and DARRELL BATH enthralled an invited audience at a film studio in London where they performed all of the MEDICINE HEAD hits live and more. The “more” includes tracks from John’s BRITISH LIONS, BOX OF FROGS and solo career.

Medicine Head first entered the UK charts in 1971 with “Pictures In The Sky” and had a number of Top 20 Hits as well as chart albums. This DVD shows them at their best-playing live and whilst the Hit singles may have diminished the performances of the band continue to entertain and enthral their audiences all over Europe and USA.

This DVD is over 3 hours in length and includes 22 tracks from the band as well as bonus features of interviews with John Fiddler and Darrell Bath.

Medicine Head had a string of hit singles in the 70's, but they were known as a hard-working live band too- one year they took the record of the most gigs played in that year. John Fiddler went on after Medicine Head to join the British Lions, who also included members of Mott The Hoople minus Ian Hunter of course, and the subsequent band Box Of Frogs were huge in the USA, had continual play on MTV and it was the only the reluctance of the other members that prevented the band touring.

Here on this excellent DVD, it's not the original line-up of course, but replacing Peter Hope-Evans is Darrell Bath, who does an excellent job on guitar. John and Darrell go through the back catalogue and perform the hits such as One And One Is One and Pictures In The Sky. One More Chance To Run from the Lions is included as well as favourites such as Return Of The Buffalo, from John's solo career.

The DVD was recorded last summer before an invited audience and the quality of the songs shine through. The atmosphere in the studio is warm and relaxed and you can see a good time was had by all. The DVD has 5.1 surround sound and DTS so that is very welcome and there are excellent interviews with John Fiddler, Darrell Bath and Keith Smith (who runs the Mott The Hoople Fanzine, 2 Miles from Heaven.)

...all the offerings here are Fiddler through and through - booming acoustic guitar and soulful, roaring vocals. Moving, while entertaining and beautifully recorded, and there are interviews with Fiddler and Bath

There is something very special about musicians performing with just the bare essentials, and while John does also play harmonica it is vocals, guitars, and great songs that capture the attention. This DVD is three hours long, with the gig itself lasting for two hours and containing 23 songs...Yet another very worthy release from Angel Air.

With 22 tracks and bonus interviews you can't quibble about value for money...if you know Fiddler more from recent stints as frontman of Mott spin-offs British Lions or ex-Yardbirds act Box Of Frogs...you'll be more than satisfied.