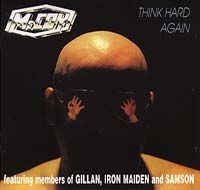 Big Bad Bald Bearded and…Bassy. John McCoy is a rock stalwart. Although best known for his stint with Gillan, he has worked with Atomic Rooster, Curved Air, Samson and Mammoth. In addition, he produced all of Gillan’s Top 10 albums.

Think Hard…Again was originally two albums. “Think Hard” was released in 1985 and “The Mini Album” in 1982.

McCoy is John McCoy, best known as the Big Bad Bearded Bass player with Gillan, plus fellow ex-Gillan member Colin Towns, Paul Samson (of Samson fame), Ron Rebel (Iron Maiden's original drummer) and vocalist T-Bone Rees. The newly released CD, Think Hard...Again, was originally two albums, The Mini Album from 1982 and Think Hard from 1985. Musically we're talking the sort of heavy rock you would expect from the musicians featured. A mixture of hard rocking tracks and ballads. Of particular note are Because You Lied (a song for Ian Gillan), which came out of the way McCoy and the rest of Gillan were treated when the band split, and a high energy version of the Fleetwood Mac classic Oh Well!.

It's not my kettle of fish, but then there are those who are partial to the odd kipper

The big bald bassist who made his name with Zzebra in the 70s and with Gillan at the turn of the 80s went solo in 1983 and produced two superb metal albums, featured on this package…With help from Gillan pianist Colin Towns…you get a pretty essential collection.