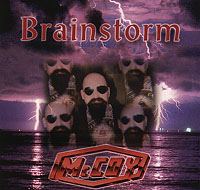 You don’t get bigger, badder, beardier or balder than John McCoy. In the late-1970s John was part of Gillan and in demand as a session player and producer. He subsequently formed Mammoth (SJPCD006) and concentrated on his songwriting and production skills. Some of his compositions have been used on the TV programmes “The Bill” and “Band Of Gold”.

On “Brainstorm” he is joined by ex-Belladonna guitarist/vocalist Al Romano and Mike Scoitto(From The Fire). This CD is the culmination of two years work and is the perfect showcase for McCoy’s talents, as well as some great hard rock playing. Sometimes introspective, sometimes wildly upfront this is an album that always repays repeated investigation.