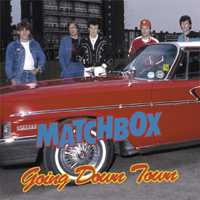 MATCHBOX shot to fame in 1979 with mainstream chart success including the hits ‘Rockabilly Rebel’, ‘When You Ask About Love’ and ‘Over The Rainbow’. Their last single chart success was in 1982 with the track ‘One More Saturday Night’.

In 1985 they recorded ‘Going Down Town’ which was to become their final album for a decade. It was originally only released in Sweden but now for the first time ever is released worldwide.

BRIAN HODGSON said about the album: “We wanted it to be a good time rock ‘n’ roll album, to put a smile on your face and get you dancing”. Job done.

...now released for the first time worldwide on this budget priced CD. All of the 12 rock 'n' roll and rockabilly tracks are written or co-written by leader Hodgson and include numbers such as 'Nothing To Do But Rock And Roll All Day', 'She's Hot', 'Roller Skating Sally' and 'Flip Flop Floosie'.

MATCHBOX 'Going Down Town' represents a fine tribute to a bygone era and succeeds only too well in re-creating the sounds of the greats. All 12 tracks on this re-release were written by Brian Hodgson - a versatile guitarist and also former Rutles founder-member. And a pretty fine job he did too!

Vocal harmonies stacked around Graham Fenton's mellifluous yelp and the sting of Gerry Hogan's guitars, steel and otherwise, make "Flip Flop Floosie" irresistible and "Shooting Gallery" - penned by bassist Brian Hodgson, an original Rutle, and taken to the charts by Shakin' Stevens in 1980 - a booming joy, while "Hot Love" snaps to the boogie shout-a-rama.

If you enjoy old school rock and roll and don't mind the clock being turned back, oh about sixty years or so, Going Down Town will be a very enjoyable nostalgic ride that is just plain fun to listen to. Recommended for fans of Eddie Cochran, Buddy Holly and '50s rock music in general.