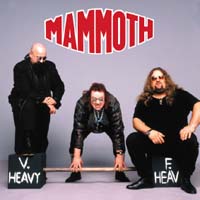 MAMMOTH: 1. Any large extinct elephant of the Pleistocene epoch, having a hairy coat and long curved tusks.
2. Anything of gigantic size or importance.

Mammoth the band, were definitely the latter. A truly larger than life rock outfit led by the man-mountain singer Nicky Moore, who’d cut his teeth in Samson, and the big bald bearded bassist John McCoy, famed for his stint with former Deep Purple vocalist Ian Gillan in the chart topping Gillan.

Mammoth by name and mammoth by nature. And not just is size;they were mammoth in their sound and attitudes too. The project lasted from Christmas ‘86 to the latter end of 1989, yet it yielded only one album and a handful of singles (despite rave reviews at the time), until John delved into his mammoth vaults.

So, to this album. Mammoth had started work on a second album before their untimely demise and these tracks, coupled with some early demos had been released on Angel Air as XXXL in 1997. The release suffered manufacturing problems which have now been rectified. The revised track listing kicks off with the Prestatyn show from November 1987, which was part of Radio 1’s birthday celebrations, six tracks compete with introductions by the Rock Show’s Tommy Vance. Larger and Live they really were.

This CD shows what the band, music and all the hype were all about. A band that demand not to be forgotten, despite their premature extinction. Enjoy!

Built around the novel idea of having heavy musicians playing heavy music, they released one full studio album and had single success with Fatman. This release contains six live tracks from a Radio One road show in Prestatyn in 1987 (with the legendary DJ Tommy Vance compering) plus songs that would have made a second album had there ever been one released.

The live tracks show Moore in great form he has bluesy voice (his Samson era work is a must in any rock fans collection) and can really belt out when needed, including the catchy Fatman (there is also a demo version of this track on here on well). Other live highlights include the AOR of Thirty Pieces Of Silver and the radio friendly rock of Always And Forever.

Worth a listen just to here what could have been with their second album had it ever seen the light of day. Despite the fat gimmick there was good tunes and music in the band and its a shame they never carried on. In Moore and McCoy they had a strong writing partnership and produced some classic AOR/melodic rock tunes, not unlike latter day Slade at times. Nicely packaged with informative sleeve notes from Record Collectors Joe Geesin.

The heaviest Rock band ever? Well, in the 1980s the UK band MAMMOTH received a great deal of publicity with being labelled as the heaviest rockband on the scene, but it’s a shame they were never taken serously for their music, because their mix of AOR and Melodic Heavy Rock sounded very impressive at times. Notable members include vocalist NICKY MOORE and bassist/guitarist JOHN MCCOY, and basically this CD release on ANGEL AIR RECORDS contains most of the recordings by MAMMOTH.

In total 17 tracks are included, of which 6 are live recorded tracks. The 11 studio tracks are a very interesting listen for fans of 80s British AOR/Melodic Rock, although the band also offered some weaker rocksongs (like “Monster mania”, “Working for the man”, “Dressed to kill”, “Bet you wish” and “Do what you want to”). Highlights however are such great AOR/Melodic Rockers like “Fatman”, “All the days”, “Can’t take the hurt” (almost a classic, fantastic memorable chorus!), “Always and forever” and “Catcher in the rye”. Without a doubt, an underrated band that could have scored massive with their song “Can’t take the hurt”, although need to be added here that it ended up on the soundtrack of the famous Horrormovie ‘Freddy’s Nightmare on Elm Street’, so there was some success, but the main feature on the band was the fact they were the heaviest band on the planet and were more seen as some sort of SPINAL TAP kinda band! (8/10)

If these guys were as pretty as Bon Jovi then they could have been huge...This is a good album, certainly one that hard rock lovers of the old school should seek out...

...Mammoth emerge one of the most monstrous bands of their - and any other - age...

We hard rockers usually talk about heavy bands, here's one that surpasses John Candy. MAMMOTH did not follow Jane Fonda´s aerobics video but went for pounds per inch. Formed around Christmas 1986 consisting of Nicky Moore (vocals, ex. SAMSON), John McCoy (bass, ex. GILLAN), Kenny Cox (guitars, ex. MORE) and "Tubby" Vinnie Reid, drums. Jive contracted the band and the game was afoot. Amidst the mix of irony ("Fatman"), mature rock, pub rock, geezer rock, PINK FLOYD-tendencies and hits there was a lot of circumstances as nearly always in NWOBHM circles. At least until the band went belly up in 1989.

The first to go was Kenny Cox who was replaced by the predestines Big Mac Baker but even the wafer thin Bernie Tormé guested. Anyhow, on offer here are six live tracks from Prestatyn introduced by Tommy Vance and eleven studio tracks. Pure dynamite of its kind but I miss a few like for instance "Political Animal". An album to discover but do keep an eye out for the White Mammoth on the M1!