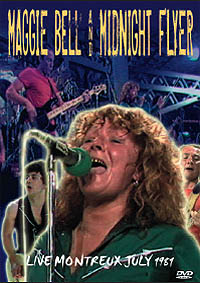 This is 1981 and Maggie Bell and Midnight Flyer have just finished supporting AC/DC on their European tour.

Their album ‘Midnight Flyer’ had been released on the famous Swansong label during February and they
were playing some European Dates of their own including an appearance at Montreux Jazz Festival on
8th July 1981.

On the bill also that night was TAJ MAHAL and ALBERT COLLINS both of whom appear on the
‘bonus tracks ‘on this DVD.

... a decade on from her emergence aboard Stone The Crows (also the subject of an excellent Angel Air DVD), Bell remained one of British blues' most scintillating performers.

You really can't go wrong here. It's a no-frills affair that does what it says on the tin. Top notch stuff.

The packaging of this DVD should have been reinforced to hold in the energy lurking inside that is ready to explode onto your screen...