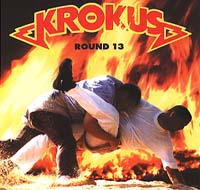 Krokus was formed in Switzerland in the mid-1970′s and had several album successes in the 1980s, including “Hardware”, “One Vice At A Time” and “Headhunter” which went platinum in the US. At the same time the band was touring constantly, demonstrating their ability to riff aggressively and create hard-rock excitement.

This is the thirteenth release in the Krokus saga and this exclusive Angel Air release includes a complete discography of the band in the liner notes. If you like your rock hard and heavy…Krokus…no contest.

“Round 13″ the CD is perfectly complemented by the other Krokus release on Angel Air, “Stampede/To Be Or Not To Be” (SJPCD042).

I have always been a big fan of KROKUS, but when original lead singer MARC STORACE left the band and in came new singer Carl Sentance I had my doubts if this would bring back the classic KROKUS sound. The band released with Carl a few albums, of which ‘Round 13’ was released by ANGEL AIR RECORDS. The album had a high class production by TONY PLATT and musically it was typical KROKUS/AC/DC riff orientated Hardrock, but definitely not as good as classy KROKUS. Especially the opener “Heya” was a bit too simple to make it an interesting tune, but happily the rest of the CD is sometimes good old KROKUS Hardrock with mostly sing-a-long songs such as “Money back”, “Break free”, “Witchhunt” and “Wild times”. On the other hand, there are also plenty of weaker tunes on the album, such as “Guitar rules”, “Suck my guitar”, “Blood comes easy” and the afforementioned “Heya”.

Anyway, the band brought back MARC STORACE on their new CD which was released earlier this year, but the CD still hasn’t had an official release over here, although it went to number 1 in Switzerland! Check out this KROKUS CD from 1999 if you want to hear someone else singing, but I rather prefer the MARC STORACE era KROKUS. (Points: 7.5 out of 10)