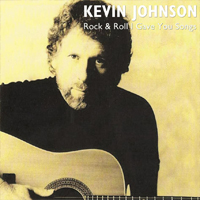 KEVIN JOHNSON made the UK Top 30 in 1975 with the hauntingly memorable “Rock & Roll I Gave You The Best Years Of My Life”. The song had originally been released back in 1973 and made Kevin’s native Australian Top 5 before making the USA Billboard charts. It did not originally chart in the UK until it was rereleased on the UK label slightly edited in late 1974.

Kevin has had much chart success around the world over the years and this release includes his original charts hit from UK, USA, Australia, Germany, Ireland, Canada and New Zealand to name just a few of the countries that his songs and performances have resonated with the record buying public.

Despite the fact that over the years he's had hits in the United Kingdom, the United States, Australia, Germany, Iceland, Canada, New Zealand, and more...for some reason his music just never reached our ears. It seems appropriate that the Angel Air label would make the wise decision to release this collection of some of Johnson's best known tunes. Included are the original and single version of the title track, "Ready To Roll," "Over the Hills and Far Away," "Lola & Sassy," and "Someday Sam." So much solid hit stuff here and Kevin has a really great deep voice that provides the perfect focal point for these cuts.

Taking the listener into the artist's latter-day creativity, 'Lola & Sassy' - dedicated to his granddaughters - is the simplest of all 19 tracks on display, yet it's endearingly warmed with inner light. As is most of Kevin Johnson's songs, rock 'n' roll or otherwise, for which the veteran deserves a wider recognition. ***1/2

...good to hear some other quality songs I'd never heard before, too, such as 'Grab The Money And Run', 'Over The Hills And Far Away', 'Woman You Took My Life' and the gorgeous 'Wanting You More Everyday'.