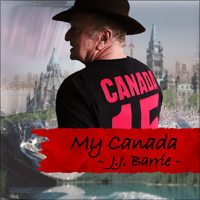 Born a second generation Canadian in the Motor city of Oshawa, Ontario, AUTHORS has a lifetime of experience in the entertainment industry.

As a young man he formed a partnership with a school friend, creating the bizarre comedy team of Authors & Swinson. They were an instant success with their record miming act, performing in the world’s most famous venues, including the London Palladium, The Palace New York, and top night clubs throughout the world. He has been honored in his home town with a plaque on the city’s Walk of Fame.

In the 1970’s, he disbanded the comedy team and moved into the management and record business, handling the careers of many top artists including, Blue Mink, Norman Wisdom, Roger Cook and many recording acts. He created his own record label with Chapel Music, Power Exchange. During this period, Authors began writing songs and after recording a demo of one of his titles, it became apparent to Chapel Music that he should record himself. JJ Barrie was born and he went on to record many albums and singles and had a world number one hit with “No Charge” in 1976.

Authors moved into the film business and began writing screenplays. His good friend and successful film producer Larry DeWaay, who thought they were highly commercial and prompted him to form a development company based at Shepperton Studios in the U.K.

During this period he wrote a fanatasy screenplay on the legend of Ogopogo, a mythical Canadian creature living in Lake Okanagan in British Columbia. It came to the attention of a German investment company and they financed the production of the $40 million dollar (Cdn.) budget film. This was shot in New Zealand doubling for Canada, starring Bruce Greenwood and directed by the award winning British director John Henderson. The film, with computer graphic effects by the Jim Henson Creature shop was featured at the Tribeca film festival, won first prize in the Swedish festival and received top reviews from many critics inclduing the Dove Review and The Guardian in the UK

JJ has written the title song to celebrate the 150 years of Canada and has included it in his new album MY CANADA.

Authors now lives in Ontario, Canada with his wife Denise.

There's a timeless quality to his songs, anchored to Canada with a link that's bound to stay unbroken: that's what it's all about for this artist. 4/5 stars DMME.net (June 2017)