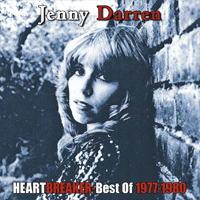 JENNY DARREN is one of the very few raunchy “rock chicks” singers from the UK that could have given Joplin a run for her money. A child star, a recording veteran in a short time, and by the late 70’s rock had come calling with a vengeance – Jenny Darren was born with a voice and stage presence to die for.

The female rock anthem “Heartbreaker” was written specifically for her by the song writing partnership Gill/Wade but sadly her then record company dragged its feet on releasing it as a single and Pat Benatar heard the track and then recorded the song which went on to chart in the USA.

The tracks on the “Best Of” were recorded in the 1977 to 1980 period mostly at the famous 10CC Strawberry Studios. Jenny was by then supporting AC/DC on tour as well as performing at all the major festivals (Reading and Knebworth) and supporting Streetwalker and Patti Smith on tour.

...In fact there is much to enjoy here. Jenny Darren has the sort of raunchy rock voice that made Janis Joplin a star and the tracks on display here show her to be very much at home with the late '70s mainstream rock sound. Her version of Heartbreaker is as good as Benatar's and makes you wonder what might have been if things had worked out differently. The magnificently titled 'Grand Canyon Of My Dreams' could have slipped off a Heart album and is one of three tracks to feature a certain Nicko McBrain on drums. An interesting discovery for me and well worth checking out.

Opener 'Heartbreaker' is the song which...yep, you read the story before. Only that this time it's Jenny Darren's version and performed as intended...Those good souls at Angel Air Records really do have a knack for 'resurrecting' either almost forgotten or underrated artists! There is a fair mix across the 19 tracks we get, incorporating rock, funky blues, bluesy rock and softer fare. Tracks 3, 7, and 17 even features Iron Maiden's Nicko McBrain on drums!

....It get's very bluesy and full-on raunchy on 'Use What You Got' and for sure Jenny uses best what she's got, which is one hell of a voice. The unique 'City Lights' skilfully fuses snazzy 70's disco-funk with truck-loads of soul, though it is the track 'Skydiver' which in my opinion stands out the most: a fabulous rock sound glides into softer pop terrain and back again to harder rhythms, all the while we can hear cool strings and some quirky sounds backing up this little gem.

A real treat this for all you Jenny Darren fans out there, and as for the uninitiated: get a copy and allow yourself to get seduced by her truly outstanding talent.

Know that Jenny opened for AC/DC, Streetwalkers, Patti Smith, and performed at Reading and Knebworth festivals, proof of perfect talent, just as 'Best Of' demonstrates.

These songs have a late 70's sound that is likely to appeal to lots of folks considering how influential the decade has become over time. Darren sure could belt out the tunes. She's been compared to Janis Joplin, and the comparison is certainly justified. She also reminds us of Tina Turner at times. Nineteen classy rockers including "Heartbreaker," "Too Many Lovers," "So Many People," and "Ladykiller."

So thanks to reissue (and more) specialists Angel Air, ladies and gentlemen, here is a singer who could have rivalled Janis Joplin for power, handles a track which made Pat Benatar's name, with ease and slides smoothly from rock to pop, funk to soul and so much more.

In fact Darren is now a more familiar face to followers of jazz, than she is the pointed rock this "best of" demonstrates so ably. Bringing together songs from her four albums between 1977 and 1980, this collection shows the talent and versatility of this lady to the full.

...the fierce 'Use What You Got' could have come from Muscle Shoals, as there's a triumphant roar blaring out, whereas 'Skydiver' off 1980's 'Jenny Darren' - yes, the second named after the artist - rolls out a Nicko McBrain-propelled acoustically-laced epic drama which somehow predicted the singer's vanishing from the public eye. Still, defiant as she is in the hard-rocking 'Ladykiller' - that should be renamed 'Lady Killer' – Jenny Darren's returning with a vengeance. Watch out!

The 19 tracks on this anthology all date from the period 1977 to 1980. At the time, Jenny played the support act for AC / DC, stood at the festivals Reading and Knebworth and supported Streetwalker and Patti Smith on tour. The musicians on most of the tracks are Jenny as a singer, Cliff Wade on keyboards, Lee Patrick on guitar, Des Tong on bass and Geoff Gill on percussion. The title track opens the set on a floating rock rhythm. 'Lay Me Like A Lady' starts slow but then turns into rock. By contrast, 'Grand Canyon Of My Dreams' is rather quiet, and a little further on is 'I Got The Feeling' which features soul elements with strings. The other tracks all are situated in the same vein...Excellent for fans of retro rock.