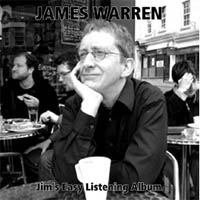 JAMES WARREN better known as vocalist with THE KORGIS and STACKRIDGE and writer of worldwide hits such as “Everybody’s Got To Learn Sometime” (original demo included on this album).

This album started life in 1995 when James produced for family and friends only “Jim’s Special Edition Easy Listening Christmas Album” which since has become much sought after by fans of the two bands he fronted.

This album inserts newer original material in place of six songs which were “covers”. Classic pop from one of England’s gifted singer songwriters.

It's a pleasant pop easy listening album...much more like his work with The Korgis than Stackridge

...a set of beautifully composed and delicately performed songs. The voice is sugar sweet and just as tasty, while the music is incredibly rich and diverse.