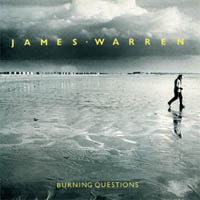 JAMES WARREN the front man of STACKRIDGE and The KORGIS grew up in Bristol, England and was heavily influenced by the Beatles in his youth.

It was their primary influences that got him into song writing which culminated his writing the classic lover song ‘Everybody’s Got to Learn Sometime’.

After enjoying considerable commercial success with Stackridge and worldwide success with The Korgis James recorded his first solo album in 1985.

Now remastered with bonus tracks it is released on CD for the first time ever and over the years this album has become a much sought after item from fans and collectors.

The album is strong, if a little dated, but is a good listen. Well annotated and with bonus cuts, it's worth checking out. ***1/2

...Warren’s songwriting has always been notable, but the numbers here put even his past hits to shame. Arguably his strongest songs to date...