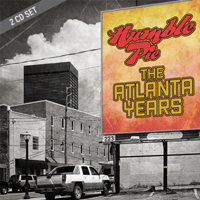 Known by many as the lost years as Steve Marriott disappeared from the public eye after the demise of Humble pie Mk II. He then assembled a third version, recording tracks for a new album down in the Atlanta area.

This 2 CD collection presents 9 tracks for that album, recorded in Pyramid Eye Studios Chattanooga, Tennessee in 1982.

The 2nd CD is a live concert of the band in Cincinnati in ‘83, featuring some later material mixed in with classic Pie tracks “I Don’t Need No Doctor” and “Hallelujah I Love Her So”. The new stuff is good, and the live CD is an excellent reminder of how good Marriott was.

This is a fascinating period in the life of Steve Marriott as so little is known about it.

The shows were fierce and tight, the studio songs were strong, the lifestyle was far far from normal.