HIGH SOCIETY I Never Go Out In The Rain 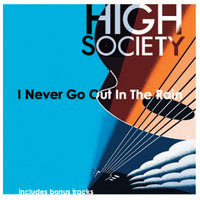 Inspired by the music of the 1930′s HIGH SOCIETY were a refreshing change from the typical pop/rock idiom when they released their debut album in 1980 which featured their UK HIT single ‘I Never Go Out In The Rain’ The group was formed around the nucleus of three talented individuals TERRY CASSIDY (GIN HOUSE & The MONKS) and RICHARD HUDSON and JOHN FORD (The STRAWBS, ELMER GANTRY’S VELVET OPERA, HUDSON FORD and The MONKS).

The band over the years has performed at diverse locations such as Berkeley Square Ball, The Aces Casino in Malaga, The Manhattan Brewery and even a jumbo jet 30,000 feet above the Atlantic.

The band continues to perform their unique repertoire today around the world.

With a sound that owes it's existence to the music and style of the 1930's, High Society's music was a refreshing change from the traditional pop/rock music.

The title track of this retrospective, 21 track CD was a minor hit for the band in November 1980.

Just a quick trawl through the songs shows the sheer musicianship and songwriting genius of these guys.

'Top Hat And Tails' brings to mind Fred Astaire, and 'Paper Cup' is just so… so… stylish.

That's the only word for this band – which incidentally is still in existence.

With crystal clear diction and a sense of style and humour that brings to mind The Pasadena Roof Orchestra and The Temperance Seven, this CD is a breath of fresh air.

...a great pastiche...think Queen minus camp or Sailor minus schmaltz...brilliant.

File under 'curio' ...vocally and musically they are very good.