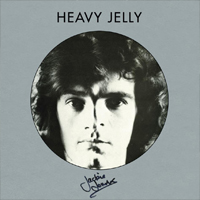 In 1970 JACKIE LOMAX joined HEAVY JELLY following on from his spell in the late 60’s as the first ever signing as a solo artist with Apple Records and being championed by The BEATLES. Heavy Jelly consisted of former AYNSLEY DUNBAR members and the drummer from The ANIMALS. The band recorded in 1970 their debut album. Heavy Jelly initially were a fictitious group that somehow became a real band.

Because of contractual problems with Apple the album has never before been officially released until now. This long lost 1970 album has attained legendary status and has appeared in bootleg form over the years. Following Jackie’s untimely death in autumn 2013 his family has resolved all contractual issues with Apple amicably and they have given their approval for the album to be released on CD at last.

Whether all of it amounts to an album per se is questionable, but this record nicely fills some gaps in the British rock bottom, and having it out means much to many a fan. ***1/4

With "Mercenary Man" it becomes a little more bluesy, in a very charged and electric track. Most is a hard rock influenced, quite normal for this English label, Angel Air.

While they did not invent anything, if you have a chance to give them a listen, you might find an interesting song.

Featuring Badfinger members Pete Ham and Tom Evans along with the Rolling Stones wind section of Bobby Keys and Jim Price the album has a blues-infused prog presentation but there is a lightness of spirit in the delivery. Exhibiting admirable songwriting, it has an almost Beatleesque edge to the music. No doubt aided by the band members and their own musical philosophies. A fine album with Lomax stamped all over it.

'I believe I was born for something', sings Lomax, who died last year, on 'Born For Something'. Well, that something apparently wasn't fame and fortune but the welcome appearance of Heavy Jelly testifies that he was a significant talent and one deserving of greater success. Blues In Britain (May 2014) If you don't mind listening to an original album with an old sound you might quite like this one. Classic Rock Society (May/June 2014) 'Bio Blues' bears all the hallmarks of a classic blues-rock composition, while the more rock-orientated is amongst the best tracks on this album. Closing number 'Take Me Down To The Water' welcomes Badfinger's Pete Ham and Tom Evans on guest vocals, or harmony vocals to be more precise. It's a track that seems to go on forever as well, though that is fine with me. The heady turn on, tune in, drop out undertones set a nice contrast to the more obvious blues-laced overtones and a gently pounding rhythm - lending the song its heartbeat. A true gem of 70's blues-rock and thankfully, it can be shared with the world. Music-News (May 2014) ...this LP never actually existed, except in the form of various bootlegs. Angel Air have finally delivered you the actual entity, from a proper master. Uncut Magazine (April 2014) Though not a million miles away from Badfinger's own music, the arrangements are looser...'You Better Let Me Know' comes closest to notability... Classic Rock Magazine (April 2014) Some of the guitar licks on 'Just Don't Feel So Good' could hail from Eric Clapton, whilst 'Take Me Down To The Water' is a semi-psychedelic electric blues monster of a track, with all the laid-back resonance of Jimi Hendrix jamming on Voodoo Chile. This is a lost classic that has finally now found the light of day. Southern Daily Echo (April 2014) It's a winsome period piece should you crave an evening of righteous nodding. Record Collector Magazine (April 2014) The showpiece is the seven-minute closer 'Take Me Down To The Water' a thrilling hybrid of sledgehammer riffing and ethereal harmonies... Uncut Magazine (April 2014) It seems incredible that music like this could be held up for so long in contractual limbo. In any event, it's finally available...much to the delight of music fans around the world. babysue (March 2014) Last but by no means least, the fact that the immortal harmonies of Badfinger's Ham & Evans boost the choir makes it all the more surprising that this crazy find only gets a release now, without Lomax being there to witness and enjoy. Good Times Germany (March 2014)