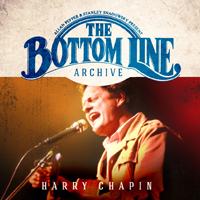 For this expanded remaster edition, we’ve given you the original set, as released in 1998, PLUS an additional, previously unreleased 88-minute show. To demarcate the second show, we’ve started with the club’s pre-show room ambience – exactly what you would have heard sitting in the audience, moments before the band took the stage.

It’s another riveting performance and as always, the band gives their impeccable all. Harry’s voice may show some wear ‘n tear by the time they come around to “Circle”, but it only adds to this vivid snapshot of an incredible artist who, having given his all, shows that there’s still something there left to give.

We invite you to enjoy the one and only Harry Chapin: Live from The Bottom Line in New York City!