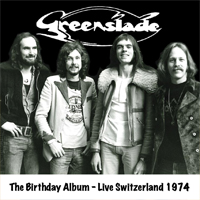 GREENSLADE are a much loved progressive rock band who were formed in 1972 after DAVE GREENSLADE and TONY REEVES left COLOSSEUM and formed the band with DAVE LAWSON, who had been in The ALAN BOWN SET, and ANDREW McCULLOCH from KING CRIMSON.

This live album was recorded in Prilly, Switzerland on 18th January 1974 on Dave Greenslade’s 31st birthday and the material performed live from the first two classic albums benefits from having been played and developed on the road. This is the last known live recording of the original band.

While he doesn't quite get the recognition he has always deserved, Greenslade for decades has been a hell of a player, right up there with Emerson, Wakeman, Lord, Hensley, and Banks, and he's on target along with Lawson throughout this thrilling live set. Hammond organ, Moog, Mellotron, electric piano, it's all here and just dripping with early '70s prog splendor. "Pilgrim's Progress" is just amazing, a rousing number featuring rampaging Hammond and wild Moog, with the rhythms just supercharged underneath, while numbers such as "Sunkissed You're Not" and "Bedside Manners are Extra" show just how tight this band were at delivering complex, symphonic prog rock.

The atmospheric "Drowning Man" has a certain ELP feel to it, featuring some killer drumming courtesy of McCulloch, and "Time to Dream" ups the energy with intricate rhythms, passionate vocals, and wild keyboard explorations. The 17-minute "Sundance" is a keyboard lovers dream, as the duo pull out all the stops for a spirited jam, and McCulloch gets to solo with reckless abandon on the extended percussive romp "Drum Folk". Toss in the hard rocking "Feathered Friends" and you have an energetic, virtuoso performance from fiery prog act who sadly, never really made it to stardom like some of their contemporaries.

With several of the pieces extending outward into multi-sectioned suites of such proportions that would give ELP or Yes a run for their money, they command a bristling with intricacy and hard rock edge that occasionally recalls the baroque complexities of Gentle Giant, driven by the Wetton-esque crunch of Tony Reeves' bass. Dave Lawson's synths provide textural contrast to Dave Greenslade's blues-rooted soloing...These spirited and road-tested renditions of their studio counterparts pack a considerable punch.

...Lawson and Greenslade really get to show their chops on the 17-minute long free-jamming 'Sundance' where they wring all sorts of wonderful sounds from their keyboards, while the 14-minute 'Drum Folk' allows McCulloch to knock seven bells out of his cavernous-sounding kit. Now if only I could grow my hair long again...

"Pilgrim's Progress" may be the most illustrious example of the ensemble's instrumental intricacy and their ability to wrap attack - sharpened to perfection in "Time To Dream" - in elegance, but "Drowning Man" adds a playful groove to it, whereas two organs propel "Feathered Friends" towards a "Gimme Some Lovin'" kind of cool before stopping at the gothic prospect of eco disaster. For original GREENSLADE, extinction was around the corner, too, and the telepathy captured here would soon be gone, but while it lasted it felt magical. *****

Two albums are played exclusively: 'Greenslade' & 'Bedside Manners Are Extra', the live versions being slightly different from the studio albums. Dave Lawson (Alan Brown Set, Episode Six, Samurai) is on piano, keyboards, clavinet and ARP synthesizer. Tony Reeves is on bass (ex-John Mayall and Colosseum. On the drums Andy McCulloch (ex-King Crimson). One notices the absence of guitar, the music of Greenslade being entirely dedicated to keyboards - beautifully used and particularly diversified. The sharing between the two aforementioned albums is fairly equal...the sound of the set is very listenable too, in accordance with the quality reissues of Angel Air. A live release recommend to lovers of keyboard-based music.

This is the last known live recording of the original line-up of progressive rock band Greenslade, recorded in Prilly, Switzerland on January 18th, 1974 - on band leader Dave Greenslade's 31st birthday...songs performed that evening were from Greenslade's first 2 studio albums, including 'An English Western', 'Sun Kissed Your Not', 'Bedside Manners Are Extra', 'Drowning Man', and 'Feathered Friends'.

...the instrumentals are the real strength of this album. Special mention must go to the rather Camel-like Swings and Roundabouts, the first part of a ten minute medley with Time Takes My Time where we get to hear Greenslade singing for the first time. However, the last duo of songs really bring the listener back into familiar Greenslade territory. Country Dance flows beautifully between fast jazz-based sections and murkier slow parts...The band are really on top form as well, never seeming to miss a note...I'd say fans of the band will definitely get a kick out of hearing this band in action at the best point in their history.

This release has historical significance for Greenslade fans as this is the last known live recording of the original line-up. Recorded in Philly, Switzerland on January 18, 1974 (Dave's birthday), the band was then comprised of Dave Greenslade, Dave Lawson, Tony Reeves, and Andrew McCulloch. The concert presents the band playing material from their first two albums. You can tell from these tracks how tight these guys had gotten from performing this material live. The sound quality is good, but you can definitely tell that this was a concert recorded in the mid-1970s. We've always felt that Greenslade was one of the best progressive bands from the seventies and yet, for some reason, they've never received the same amount of recognition that many other bands from that time period have. Nine cool tracks here including "An English Western," "Bedside Manners Are Extra," "Time To Dream," and "Feathered Friends."

This distinctly low fidelity offering captures the stylish prog rockers' performance at Prilly in Switzerland on keyboard ace Dave Greenslade's 31st birthday, in what was destined to be the last known live recording made by their original line-up.

Greenslade was a band you could always listen to with pleasure, both on record and live. In 1974 they were on the stage at the renowned Jazz Bilzen Festival and gave an impressive show. With this release, you get to relive it!

The 72-minute excursion results from a recording that was only recently discovered by Reeves. The show was taped - on Dave Greenslade's 31st birthday - in Prilly, Switzerland, during a European tour by the band. The big Greenslade following will be delighted to hear a selection of some of the songs and instrumentals they love resplendent in a concert ambience.