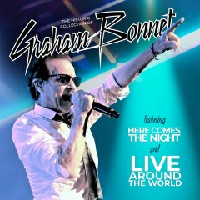 ‘Here Comes The Night’ was a studio album from 1991 originally recorded while Graham was in Australia, it features a return to the pop format after many years fronting heavy rock acts.

Included here is a re-recording of the Marbles hit “Only One Woman”.

CD-2 Live Around The World:

We present ‘a best of Graham Bonnet live’ at various locations and around the world throughout the years of his considerable career.

These songs musically span his time as a member of Rainbow, Michael Schenker Group, Alcatrazz, Impellitteri and a number of his solo hits.