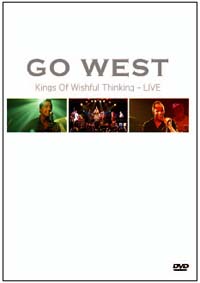 GO WEST-PETER COX and RICHARD DRUMMIE. Between 1985 and 1993 they notched up in the UK alone 13 Hit singles as well as Hit albums “Go West” and “Bangs And Crashes”. The band is, to this day centred around the song writing partnership of vocalist Peter Cox and multi-instrumentalist Richard Drummie.

During Winter 2003 a sell out concert by GO WEST was recorded especially for DVD release and features no less than 10 of their Hit Singles as well as a new track “Glow” with a bonus feature on the DVD of “Glow-Exclusive Preview” with Peter and Richard being filmed in the studio whilst recording the song.

...the crowd are keen and the set-up is professional and good-natured. All the hits are here...plus about 12 other songs and some interview material

The duo cite Todd Rundgren, Stevie Wonder, Paul Rodgers and Marvin Gaye as some of their influences and with the instrumental expertise of Drummie (he is a fine guitarist and keyboard player) and the soulful voice of Cox it comes together nicely...

There is a real rapport between the band and the crowd which makes all of the intervening time just melt away...Overall this is a DVD that will interest not only new fans who have been brought in by the appearance of Peter Cox on TV but also by those who were fans years ago but somehow lost track of them along the way. At 160 minutes long this is definitely value for money.

...some generous bonus features, including documentary footage and interview material, while American fans will be especially pleased to discover that all three are region-free, meaning they will play on any regular DVD player.

The Dolby Digital 5.1 mix is the nice surprise here, with some real articulation and even some fullness. Extras include an interview where they are well spoken enough, outtakes, brief “blog” text, and “Glow Preview” about their next project.

In the 1980s a very popular band in the UK, but in the rest of the world only known for their hit “When I close my eyes” and their appearance on one of the best soundtracks of all times (ROCKY 4).

Now a DVD is available of a recent concert they gave. Although they lost their 80s hair look, the band still sounds like the 80s, with a big keyboards sound and soulful lead vocals.

All their UK hits were performed during the concert they gave and although I had not listened to this band before it gave me a good feeling watching this professional recorded DVD...a must-have because GO WEST was another typical 80s product and they still sound very strong.

Besides a full concert performance also interviews with the 2 main members (Peter Cox and Richard Drummie) and a history bonus feature is included on this 2 hours and 40 minutes counting DVD (Points: 8.2 out of 10)