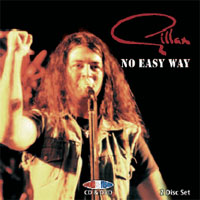 GILLAN enjoyed tremendous commercial success during 1980-this was their year and their single ‘Trouble’ was a Top 20 smash hit. Their album ‘Glory Road’ had entered the UK charts at Number 3 and they had just returned from playing live in USA.

On Disc 2 (DVD) is the concert in Edinburgh the following month which was recorded for Scottish TV where the band once again had the audience eating out of their hands.

Classic Rock from Gillan in their prime in both Sound & Vision.

…a welcome opportunity to recapture the sights and sounds of Gillan the band. Not just a release for Gillan fans only, anyone with a taste for classic Hard Rock should definitely seek this out.

The band, especially guitarist Bernie Torme, was absolutely ferocious; the CD is awesome, but seeing is believing, and the DVD's their crowning glory.

The band were operating at the peak of their powers during this period, and the inclusion of some interesting interview footage should help make this two-disc set an essential purchase for discerning hard rock enthusiasts.

Running through a set list drawn heavily from Glory (Road), albeit with a few Universe numbers thrown in for good measure, the band were on fire. this is Gillan at their mightiest heights.

GILLAN thunders into gear with "Second Sight/Unchain Your Brain". The band was at their height of their career and their internal relations. Ian's voice was up to both singing and screaming, and the audience was euphoric. Most of the songs were culled from the albums "Mr Universe" and "Glory Road". More unusual was the inclusion of "Running White Face City Boy"...

What with the usual material such as Colin Towns' keyboards-driven, vertiginous "Vengeance" or "Mr. Universe", obscure yet fantastic "On The Rocks" and "Are You Sure?" make a rare appearance in the set which more than makes up for inferior quality of the last tracks - recorded by a fan, they make the performance almost complete... Possibly the most charged GILLAN performance of all. ****4/5

This is another of those brilliant releases from Angel Air that come with a bonus DVD...

Quality wise the footage is pretty decent considering its agae and the source of the material. The audio track sounds good when played loud, it's a pro shot video...

If you're a Gillan fan, this is definitely one to get hold of...