FREEDOM – Is More Than A Word 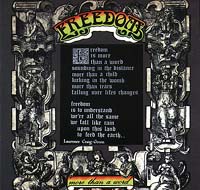 FREEDOM was formed in the autumn of 1967 by two ex-members of Procol Harum, Bobby Harrison and Ray Royer. This album, released for the first time on CD, is the band’s last-ever release from 1972 and featured Roger Saunders, Steve Jolly and Pete Dennis, and Bobby Harrison.

Now with informative sleeve notes and remastered, the CD is a great addition to the band’s recorded “history” presented by Angel Air.

Bobby Harrison went on to perform solo, with “Funkist”, with Icelandic funksters Mezzoforte, and with Micky Moody in Snafu. However Freedom made some evocative, and definitive, blues-rock in the early seventies and their heritage has been rightly and respectfully restored by Angel Air.

"...Angel Air have keenly reissued the album with their usual eye for detail, expansive sleeve notes and interesting pics!"

...for those who still enjoy British blues rock as purveyed by Cream and their many followers it's superior stuff and a worthwhile buy.

...the fact that the original LP is rated at £100, it's more than welcome for fans. Mixing blues-rock, funk, and gentle piano-based 70s pop, the atmosphere is very upbeat...although, sadly, Freedom never made the first division of British rock, this quality package is well worth checking out.

...a triumph of heavy blues rock and psychedelic pop which brought favourable comparisons with the likes of Cream and Led Zeppelin, and justifiably so...by the time of this release Freedom had abandoned their hard blues driven approach for a funkier, more soulful sound...

...a classy rhythm and blues album. This isn't really rocky, isn't really pop - and doesn't get into the really heavy R & B territory...As the sleeve notes say, this album is very much a child of its time. the band's sound is very much fixed in the late sixties/early Seventies alongside the likes of Cream and Jimi Hendrix...If you like your rock raw and bluesy, then check this out. The middle five tracks will please you. As for the rest - well, they are there, make up your own minds!

While fans of the band's earlier epic productions might find themselves twitching uncomfortably as the guitars blare and the swamp snakes squiggle, this might well be Freedom's finest album

...another career ending benchmark, this time from 1972...A mixed bag of delights

Angel Air have made a tremendous work with the reissues...Fantastic heavy blues based rock with great vocals and excellent guitar work

Angel Air put out another undiscovered gem from the late 60s/early 70s British scene...All trademarks of the 70's heavy rock scene (standout guitar playing, awesome vocals, excellent rhythm section, hippie attitude etc) can be heard...Great riffs, moods and even the use of congas make the album a standout release...

...Angel Air have done it again in finding another excellent album from the dark forgotten past...

Suggesting his future recordings with Snafu, Harrison pushes the sound in a funky, rhythmic direction on the pulsating eight-minute instrumental 'Brainbox Jam'. Aspiring to singer/songwriter status, Saunders leads the group through the sweeping piano ballads 'Direction' and 'Dream.'