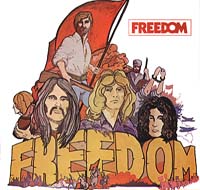 Freedom were formed in late 1967 by two former Procol Harum members, drummer Bobby Harrison and guitarist Ray Royer. The second incarnation of this band, featured guitarist Roger Saunders  and bass player Walter Monagham. Both had featured in a band called The Washington DCs who had a No 1 hit single in Turkey in 1964 with the song “Kisses Sweeter Than Wine”.

Freedom were stylistically on a par with other bands such as Cream. Their first album ‘At Last’ is also available on Angel Air. This CD is a reissue of the follow-up album released in 1970. More changes in the band occurred, Pete Dennis replaced Monagham on bass and extra keyboard player Steve Jolly joined.

By late 1972, Freedom had disbanded. Roger Saunders made some headway as a session player and songwriter and throughout most of the eighties was a member of Gary Glitter’s Band. Sadly he died early in 2000. Bobby Harrison went on to form Snafu.

With only Harrison remaining from the original line-up, psychedelia had given way to a...heavy blues-rock style. Undoubtedly skilled musicians with strong three-part harmonies and an impressive live act...

...Coming out of the British beat boom and influenced by the US West Coast scene, there are strong elements of excellent blues-rock here...worth checking out.

...Originally released in 1970 this is the first time that it has been available on CD thanks to the excellent Angel Air label. Freedom played a style of blues and R&B very popular at the time but with very definite psychedelic overtones and were favourably compared with the likes of Cream and Led Zeppelin...The musicianship...is exemplary and it remains a mystery why bands such as Freedom are not mentioned in the same breath of their more famous counterparts, but thanks to labels like Angel Air their music is once again available to the masses. A truly excellent release

...By the time Procol Harum spin-off group Freedom recorded this eponymous album in 1971, they'd long since abandoned that group's classical roots in favour of a coarser, Cream/Sabbath-style progressive blues template...The presence of three would-be lead singers helped Freedom to wring the max from the formula...They were probably cracking live...

...a fine example of catchy guitar-driven rock and blues...Fans of Cream will lap this up. A gem of a release, reinforced with extensive liner notes.

... this delightful period piece is redolent of The Who circa Live At Leeds...The sleeve notes also contain a brilliant anecdote about Ozzy osbourne flinging excreta at Curved Air's Sonja Kristina

...The revised lineup's first album, At Last, was reissued last year; now Freedom, their 1970 follow-up, has arrived and what a treat it is. Of course it's cut firmly in the sound of the times, power-chord blues rock with an eye for at least a soupcon of virtuoso flavouring. But it's also very melodic, with genuinely memorable songs shot through with equally unforgettable guitar (from the late Roger Saunders) and drums...They also toured Britain on a bill with Black Sabbath and Curved Air, and if you ever wondered what Ozzy Osbourne and Sonja Kristina made of one another, there's an anecdote in the booklet that will answer all your questions.

Should appeal to fans of Traffic, Cream and maybe some fans of Zeppelin and possibly Sabbath