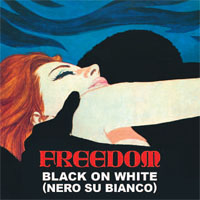 FREEDOM was formed in the summer of 1967 by two ex PROCOL HARUM members BOBBY HARRISON and RAY ROYER. Both had been dismissed from Procol after ‘internal disagreements’ They became the first clients of Jonathon Weston who had been Procol’s Manager (until he had been ousted just before Harrison and Royer). They all had something to prove.

They were immediately commissioned by Dino De Laurentis (famed Italian producer) to write the score for an Italian film ‘Black On White’ and in 1968 wrote and recorded 14 tracks within 2 months. The band was then asked to appear in the actual film by the director Tinto Brass playing the songs as a commentary to a film virtually without any dialogue.

The film was critically acclaimed at the following years Cannes Film Festival even though it was always destined to be an art film.

By early 1969 the original Freedom were no more and Bobby Harrison had replaced all the band members apart from himself and entered Orange Studios on London in June 1969 to record what was treated then as the band’s first LP ‘Freedom At Last’.

That though is another story. Sit back, tune in, turn on and drop out and listen to one of the finest psychedelic pop albums never officially released with shades of PROCOL HARUM, TRAFFIC and FAMILY

Freedom were formed by drummer Bobby Harison and guitarist Ray Royer, both formerly of Procol Harum. This 1969 debut (recorded the previous year) is a lot more psychedelic than the later hard rock efforts and was the soundtrack to the Dino de Laurentis film of the same name.

The sound is keyboard led with a melodic bass line, vocal harmonies, it nods at hard rock in a very whimsical way. Some light strings add to the atmosphere, and there is in places something sounding like a harpsichord.

Elsewhere it does go into proto-hard rock territory.

As period music goes it is strong, and will please fans, especially with the plethora of sleevenotes (including band involvement), remastering and extra tracks (including two 1968 singles). But this is far from the band’s best album. Whether their hands were tied to the soundtrack or the musical period, Freedom did go onto much better things. 3/5

The primal use of mellotron and violin in a rock context is also of note to proto-prog devotees, as it is highly accomplished and exciting here.

...the overall sound of the group was pretty much what you'd expect for the British music scene of the time, especially when you compare them with bands like Traffic and Procol Harum...psychedelic tinged pop...

...a superb slice of 60's pop/soul/psychedelia...another gem from Angel Air