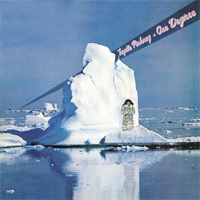 Having formed The THREE DEGREES back in 1967 with SHEILA FERGUSSON and VALERIE HOLIDAY and achieved worldwide success with “When Will I See You Again” and “Take Good Care of Yourself” FAYETTE PINKNEY left the group in 1976 to pursue roles outside of the music industry. In 1979 a new record label (CHOPPER RECORDS formed by LAURENCE BRISTOW and GEOFF MORROW) snatched Fayette from under the noses of EMI and signed her to record a solo album.

The album “One Degree” was recorded at the famous CBS studios at Whitfield Street, London and produced by Geoff and KEITH MANSFIELD (he was responsible for the classic arrangements on LOVE AFFAIR “Everlasting Love” and MARMALADE’S “Loving Things”).

All of the songs are rather short I should perhaps warn you; nonetheless, this is a fantastic re-release of a rare album, and a must for fans of that genre.

All of the songs are rather short I should perhaps warn you; nonetheless, this is a fantastic re-release of a rare album, and a must for fans of that genre.

The album is only 32 minutes long, but Fayette's in very good voice - and there's particularly noticeable instrumental colour from a sessions squad that includes such illustrious industry figures as Les Hurdle (bass), Barry Morgan (drums) and Frank Ricotti (percussion).

...although tracks like vibrant 'Light In The Window' or the ska-kissed 'Half Of Love' are typical for their era, if infectious, 'The Other Side Of Me' wafts delicately on the acoustic wave, while other ballad, 'Nothing Lasts For Ever', reveals all the strength of the singer's pipes. Yet 'Tearaway' truly transcends the temporal shackles with its transparent funk and gentle synthetic undercurrent that Les Hurdle's bass punctures in all the right places, as it does in the sweet, romantic 'Mine Is Not To Reason Why' the full-on soul sway of which makes one long for more. Sadly, there's nothing more, Fayette Pinkney died in 2009, having left this as a lasting legacy. *** 1/3