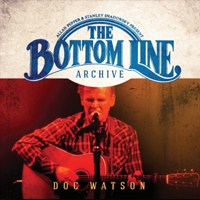 Doc and the guys arrived at The Bottom Line in the front part of 2002, on the heels of his 6th Grammy – this time for Best Traditional Folk Album for the triple-disc, Legacy. (Doc would garner a total of 8 Grammys during his career, including a Lifetime Achievement Award in 2004.)

As was usual at that time, Doc was joined by loyal compatriots Jack Lawrence, and grandson Richard Eddie Watson. (Don’t miss the trio of chums’ between-songs banter, and their playful palling-around. It is priceless.)

And now folks, we welcome you to your chair on The Back Porch of The Bottom Line. Sit back for a spell, and enjoy a friendly hang with Doc Watson, Richard Eddy Watson, and Jack Lawrence. They’ll be playing country music for you – in its most splendid finery.