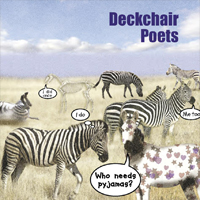 Why the name DECKCHAIR POETS? Lynden said “It was obvious from the fun nature of Pyjamas songs that they could not be released under the Jerusalem banner and a new name was needed. Geoff and I considered, at our time of life we should be sitting on a beach somewhere reciting amusing limericks and thus the name appeared”

Listen to refreshing roller coaster ride of exhilarating fun packed brilliance featuring a torrent of wondrously inventive guitar, keyboard solos and stunning vocals from one of the best Prog Rock albums ever.

Deckchair Poets, fronted by Jerusalem's Lynden Williams, is a fun, clever and versatile rock band. Deep Purple fans will find much joy in quite a few of the tracks, due to the classic rock inspired organ sounds (check out the keyboards on "Brown Trousers") and delivery (and a bit of trivia: it was DP's Ian Gillan who produced Jerusalem's 1972 album); and while there's also some old fashioned rock and roll in "One Ugly Child" and "You're So Square (Baby I Don't Care)" , the band manages to sound quite fresh and true to current times, by means of production and tones.

"Elephants, Not Ivory", for example, is modern rock sounding in terms of both its electronic keyboard sounds and its guitar work...Who Needs Pyjamas? is a proficient, amusing listen, and in that aspect it's a kind of album you don't see much of these days (which earns it an extra point!). (8/10)

For those with a more prominent funny bone, Deckchair Poets could well be one of the surprise albums of the year!

Ones who don't take heed might latch onto the heavy funky message of "Brown Trousers" that catches the gist of the "if-then" conditional where AOR tropes suck on the Hammond meat and Ollie Hannifan's axe bones with a side dish of mashed potato, brie and rubber duck, before serving a nu-metal clang with "Human Pie" filled with a harmony guitar. Such a bright feeling, helped by Nick D'Virgilio's beat, swells in "Sunshine" and "Sunset Strip" whose romanticism can well be a parody of '80s rock songs, yet it stands tall with the best of 'em up to infectious synthesizer solos, as does the translucent, albeit angry, eco-jive of "Elephants, Not Ivory."

'Who Needs Pyjamas?' is wonderful fun - musically great stuff and lyrically a real hoot - a refreshing, light-hearted treat to take the intensity out of every Prog fan's day!