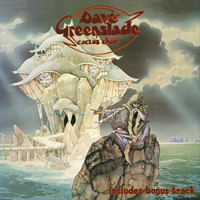 GREENSLADE had split up in 1975 but DAVE GREENSLADE had already written in effect a new album of music and he was ready to make another album.

Assembling a cast of stellar musicians he recorded himself “Cactus Choir” which was released in 1976 to worldwide critical acclaim. Long out of print on vinyl this is the first CD release of the much sought after album.

Having written in 1974 the theme for a one off programme “Gangsters” Dave wrote the lyrics in 1976 for the theme tune for “Gangsters” BBC TV series and he got CHRIS FARLOWE to sing it which is included as a bonus track.

Chris Farlowe of course is lead singer with COLOSSEUM with who Dave is currently on tour.

...this is every bit as good as most of the Greenslade band output, with a snappy opener 'Pedro's Party', the politically minded 'Gettysburg', the excellent title track and the closing epic 'Finale' standing out in particular. As a bonus, Dave's theme tune to the TV programme Gangsters is included as a bonus track, and very good it is too...a welcome chance to check out a highly enjoyable album that many might have forgotten or even overlooked entirely. And that's a good thing. A very good thing.

There are certainly some very familiar elements that immediately recall earlier Greenslade albums (most notably those wonderful keyboard sounds). But with different artists backing Dave, as you might expect...the overall sound is more spacious and varied. Artists lending their talents on this album include Tony Reeves, Simon Phillips, Steve Gould, Dave Markee, Mick Graham, John Perry, and Bill Jackman. Plus the orchestra on "Finale" was conducted by Martin Ford and arranged by Simon Jeffes.

These tracks have held up exceedingly well over time, and the sound quality is excellent. This is highly recommended for anyone into 1970s progressive rock...or anyone who enjoys progressive music in general. Although it was a favorite among critics, this album unfortunately fell through the cracks when it was first released because the band had broken up and it was released under Dave's name. Wonderfully melodic cuts include "Pedro's Party," "Gettysburg," "Forever and Ever," "Cactus Choir," and "Country Dance." Also includes the bonus track "Gangsters" (the theme for the BBC TV series). Recommended. Top pick.

This is an interesting and welcome reissue of an underrated album...the sound is good overall and there's still a vibrancy here that some overly remixed albums can lose. Featuring the original, stunning, Roger Dean artwork, Cactus Choir stands up well to scrutiny some forty-plus years after its initial release.

Greenslade had split up in 1975 but Dave Greenslade had already written what was in effect a new album's worth of music and he didn't want it to go to waste so he assembled a cast of stellar musicians...and Cactus Choir was released on vinyl in 1976. Having written in 1974 the theme for a one-off BBC TV programme Gangsters, Dave then wrote the theme tune for the follow up TV series Gangsters and got Chris Farlowe to sing it. This now appears as a bonus track on this budget priced CD release.

Greenslade's collective decision to reluctantly call it a day in 1975 left their creative mainstay Dave Greenslade with a weighty pile of still unrecorded material on his hands, and this provided the musical content of his first solo album "Cactus Choir". The highly accomplished keyboardist assembled some fine musicians to underpin his efforts, including drummer Simon Phillips and Rare Bird vocalist Steve Gould, and although the finished product was well received critically sales figures were sadly underwhelming despite the presence here of impressive prog rock concoctions such as 'Country Dance', 'Gettysburg' and 'Swings and Roundabouts'.

While there's a hint of underlying hiss in the mix, the sound quality is nonetheless very good, so each instrument can be heard clearly. The drums and bass sound fantastic here making this a worthy CD release indeed. The CD booklet contains the album art in full, although rather small, along with an essay and album credits. I felt that the quotes from Greenslade in the essay could have been kept a bit more concise for readability, but it's all still interesting. It seems that Dave Greenslade's solo career is ripe for a re-appraisal!

Here's an advent of heavenly choir, a natural progression from 'Valentyne Suite,' a choir whose openness Dave Greenslade has never returned to, so it remains a glorious reminder of his most fantastic era. ****1/3

Cactus Choir may not be a landmark album, but it's sad this Greenslade relic has been unavailable since its original release - it contains some interesting ideas, and great playing.

Cactus Choir still sounds great. Smooth flowing melodies, dreamy vocals, precise arrangements...all of the pieces fit together here exactly as they should. This release features all seven tracks that were on the original album plus the bonus track "Gangsters" which was recorded for the BBC TV series of the same name and features Chris Farlowe on vocals. Recommended for Greenslade fans as well as anyone else who appreciates great progressive rock. Top pick.

Really a symphonic prog record, a branch of the genre that, by 1976, was creaking under its own weight - this album is a highlight of its type and further proof of Greenslade's unique sonic vision; tracks such as opener 'Pedro's Party' and 'Forever and Ever' retain a continuity with the instrumental meanderings of Greenslade's eponymous band.

I found much to enjoy here: Pedro's Party's uplifting synth lead backed by lots of busy percussion, the broad array of keyboard sounds on the lively 'Swings & Roundabouts', the ponderous 'Forever & Ever' which utilises the gloriously rich sound of the mellotron for an exquisite background wash, the brisk up-and-at-'em attack of 'Country Dance', and the grand finale of 'Finale' which twists and turns through many settings and also features a full orchestra...it's a very good CD and I'm delighted to be able to fill a digital hole in my Greenslade collection.

As always, Angel Air has done a great job with this reissue of a long overlooked album in the discography of keyboard legend Dave Greenslade. Those into '70s keyboard dominated prog who didn't investigate this one after the breakup of the Greenslade band should definitely take advantage and do so now.