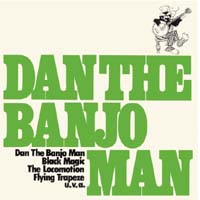 DAN THE BANJO MAN. A project that didn’t do what it said on the tin. No banjos and no man named Dan, but instead a multi instrumentalist called PHIL CORDELL who in 1971 had achieved great commercial success under another misleading pseudonym of SPRINGWATER.

By early 1974, Cordell had started to generate a new sound that moved away from the successful Springwater blueprint. He released “Dan The Banjo Man” to great commercial success in mainland Germany. A single “Dan The Banjo Man” had the distinction of reaching Number 1 in the German charts twice!
Phil Cordell said “It was used originally for an orange juice advert on German Television and that was what kicked it off”. The album quickly followed and was successful all over mainland Europe.

Released for the first time ever on CD

..there are sparks to be found

The Banjo Man juggles styles and moods like an acrobat, refashioning golden oldies with such creativity that one can't help but stand back in amazement, and the originals are just as mouth-watering...A welcome return for a spectacular album that hasn't dated in the least, growing only more magnificent with age.

...the whole of the album is all about fuzzed distorted guitars...and it is actually quite listenable...Very Seventies, in fact very very Seventies...