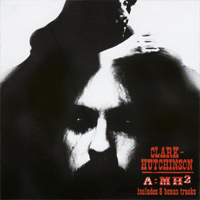 Back in 1969 ANDY CLARK and MICK HUTCHINSON decided to branch out from their band SAM GOPAL’s DREAM and produce an album and as a duo they recorded their first album release in two twelve hour sessions in London during May.

Promoted by their then record company Decca via their underground label NOVA as a ‘powerful hard rocking blues band’ whose album was ‘years ahead of it’s time’. In effect they produced a classic album that still today is much sought after.

The bonus tracks on this CD were actually their March 1969 recording debut, an unreleased collection of blues and rock that showcases their stunning musical ability but sadly the ‘suits’ at the record company deemed them too ‘blues’ and instead instructed the band to produce a fusion of psychedelic, jazz, blues album with a classical bent ‘A=MH2′ fitted that bill and was released in February 1970!

...the true star of this recording is none other than Mick Hutchinson's guitar. In fact, the entire album is basically a guitar solo album in disguise. The other instruments might set the scene, but it's the unstoppable guitar, delivered with a wide tonal range (and untouched by any studio effects!), which dominates throughout and creatively leads you as through imaginative roads.

The eight bonus tracks - which were rejected by the record company at the time due to their bluesy nature - are in fact fine blues rock numbers. Unlike the released album, these are all songs that feature vocals, and they echo the 1968 Super Session by Bloomfield, Kooper and Stills with their eager, lively and uplifting, blues rock and Hutchinson's wailing electric guitar ("Make You" even benefits from a Hendrix feel). (9/10)

Fabulous stuff - and the well-packaged album features eight bonus tracks, mainly in more conventional Brit blues mode (and with Clark singing), which were intended as the duo's debut album but were unreleased at the time.