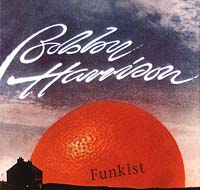 “Funkist” is considered to be the “missing link” in Bobby Harrison’s career – coming as it does between the two legendary bands Freedom and Snafu.

Bobby Harrison was one of the original members of Procol Harum, when the group recorded the famous hit single “A Whiter Shade Of Pale”. After this he formed Freedom  (SJPCD027 and SJPCD028) and in 1972 recorded “Funkist” with Roger Saunders (guitar) and Walter Monagham (bass).

For lovers of gritty and funky R&B, “Funkist” will not disappoint. It makes up a great trilogy with the Snafu albums also available on Angel Air (SJPCD030 and SJPCD032).

...an interesting document of a classy singer with some good songwriting ideas. Hats off to Angel Air for their comprehensive sleeve notes and interview which sets the scene and gives perspective to this release.

...Micky Moody (Whitesnake), Ian Paice (Purple), Tony Iommi (Sabbath), Matthew Fisher (Procol): all these and more contribute to an album released in the early 1970s...which made the US Top 100.

...there is plenty of funk and soul mixed with the blues-based rock that Bobby is best known for...The whole album is an easy mix, and Purple or Sabbath fans shouldn't expect too much heaviness. But it's a real gem, nonetheless

...Fans of funky heavy rock should definitely have a listen...

The music is very much in the 70s, but it's sheer delight if that's where you like it coming from...As regular readers of MD will know, Angel Air have released some very good albums, and this is yet another one. Avid fans of Sabbath will also find this release a welcome addition as Iommi is here, as will Purple fans, oh, and fans of...

…what we have here is a piece of rock history that was only ever released in the US before…That Bobby Harrison has a great voice, and a great ability to use that voice can be seen by comparing a track like 'Little Linda Lovejoy' with its rawer edged vocals and the purer tones of something like 'Spotlight'. The quality of the backing musicians adds all you expect to the music from the likes of Ian Paice, Tony Iommi and Micky Moody amongst many others. A classic finally gets a well-deserved release.

This mid-price reissue makes available a class album taking in the blues-rock and hard rock of the era and giving it plenty of funk rhythms and soul overtones...