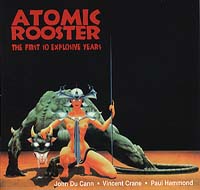 Atomic Rooster are one of the great progressive rock bands of the early seventies. Formed around organ player Vincent Crane and drummer Carl Palmer  (later with ELP), who broke away from The Crazy Of The World Of Arthur Brown, they released their eponymous debut album in 1969.

It was in 1973 that Crane sacked Du Cann and subsequently Hammond left the band. Both departees formed Bullet (later called Hard Stuff) who debuted on Purple Records and Du Cann later replaced Gary Moore in Thin Lizzy. Atomic Rooster never quite recovered in spite of a revival in the late-seventies when the “classic” line-up reformed. However, the influence of punk/ new wave is evident on the later recordings featured on this CD.

This definitive Angel Air release has been compiled by John Du Cann and features comprehensive liner notes and his own guide to each track. Several tracks feature Angel Air regular John McCoy on bass.

...My late teens were soothed by bands like Atomic Rooster, a band... that sat between progressive rock and heavy metal...

Very much compared with Deep Purple, this band achieved what few other rock bands achieved, that being several successes in the Top Ten singles chart. Those successes are heard here in live form, 'Devil's Answer' and 'Tomorrow Night'...

This album is 16 tracks long and is a rocking testament to that of the early 70's and early '80s. Those too young to remember could learn an awful lot by purchasing this, especially if your musical diet includes Deep Purple...

Put together by guitarist and Rooster original John Du Cann, this oddly-titled 16-song 'definitive' covers the gamut of prog/hard rock that he espoused with ex-Arthur Brown organ whizz Vince Crane and buddies between '70 and '72, and then 1979-82...Squawkin'!

One of the most enjoyable discs that has dropped through the mail slot this year...one of the best examples of the progressive rock/ heavy metal hybrid...be assured that the listener is taken on 75+ minute joy ride...which could just as easily have been titled "The Best Of Atomic Rooster"...As with all Angel Air releases this too comes with extensive liner notes and rare photos of the band

"On The Record" Music America magazine

...the songs stand up well, bringing into sharp focus the Rooster's unique ability to marry metal toughness with prog pretensions in an eccentric style that's so British.

For long standing fans, '...10 Explosive Years' is a chance to rediscover old gems and hear a couple of unreleased tracks. If you're not familiar with their work, check this out. You might be surprised.

... all who remember putting on their circa-1970 headphones and having their skull pecked open by a nuclear-powered chicken is not going to hold that against them. Atomic Rooster deserves far more respect than recent years (and reissues) have given the group. The First Ten Explosive Years goes some way to delivering that.

The album...contains some great stuff, and whilst a lot of it is definitely 'of that period' it still raises those neck hairs...

...strong and dynamic songs with lots of great solos on organ and guitar...and hot and furious interplay between these instruments...This 'heavy progressive' music often evokes a sound between Deep Purple and Argent but more aggressive and harder-edged...